All By Myself: Addressing the Risk to Solo Workers 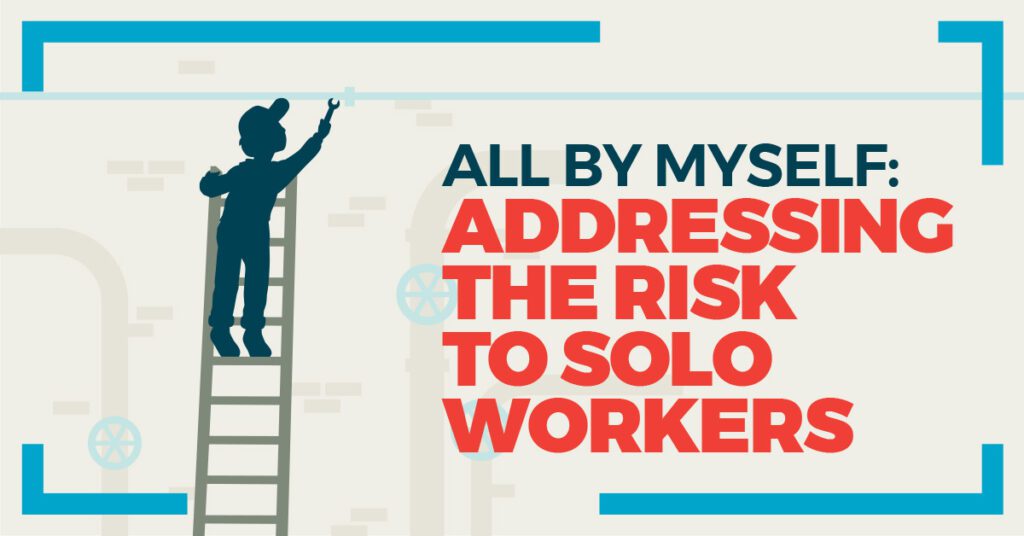 Whether in a warehouse, factory, prison, hospital, or even a school, there are inherent risks to working alone. The number of solo workers is increasing due to an organization’s work realities, the pandemic, and labor shortages. Working alone dramatically increases risk exposure for both the individual and the organization, and the stakes of crime, a fall, or a medical emergency are much higher when there’s not another employee to provide immediate aid or alert others to an incident.

It’s a strategy several institutions are putting to the test with IntelliSee.

Safety in Numbers? Not Anymore.

When working in an environment with inherent risks, such as operating machinery or significant exposure to the public, the strategy is often “safety in numbers” via over-staffing. However, with labor shortages felt across every industry, employees such as correctional workers, retail staff, and nurses may now find themselves working alone.

In 2021, two correctional officers were attacked in the same Kansas prison in two separate incidents occurring within a month of each other. In both incidents, the officers were working alone in a unit with more than 100 inmates, and both officers were hospitalized – one in intensive care. While details are often limited, most correctional facilities have live surveillance video monitoring, but this is an expensive, mundane, and error-prone task. Some organizations can’t afford 24/7/365 coverage, multiple screens are watched simultaneously, screens are continually rotated, and much of the footage is uneventful.  As humans, we zone out and miss important things or zone in to look for something specific, only to miss everything else.  As humans, we also need breaks, call in sick, forget protocols and procedures, or – in the worst cases – panic or freeze.

What if you could have a computer autonomously monitor multiple feeds simultaneously to detect and alert on risks instead? This could free up staff to be deployed elsewhere or make monitoring more effective by letting the computer highlight the screens for review vs. tasking a human to watch every frame.

A company’s liability also doesn’t end when employees clock out. It extends to their parking lots and garages, notorious areas for a variety of threats. An FBI report confirms these areas are the third most common sites for murders and assaults in the U.S. In 2019, an Omaha nurse in her 20s was assaulted by a stranger with a gun in her hospital’s parking lot. Two months later, a brutal 6-minute attack left a Wisconsin nurse dead in her hospital’s parking garage, only to be discovered three hours later by a snowplow operator. Both attacks were captured on unmonitored surveillance cameras. An investigation later showed that both attackers had been visible on camera several hours before the incidents occurred. In these situations, having a system that monitors feeds for threats in real-time could offer critical opportunities to intervene.

Despite the prevalence of video surveillance, most surveillance is not monitored, or if it is monitored, it’s too difficult for humans to monitor effectively. Solving this challenge is what inspired Maureen Pajerski, IntelliSee’s Chief Commercial Officer, to join the company out of retirement. As a former senior executive with the leading healthcare and education critical communications and safety system, she understood the importance of proactive risk management enabled by real-time situational awareness. “Before joining IntelliSee, I knew that nearly all video surveillance systems are passive,” said Pajerski. “They’re used as a visual deterrent and to record, but, in most cases, no one looks at the footage until something bad has happened. Then, if someone remembered to bookmark or save the footage, they’re used for after-the-fact forensics. Efforts are spent figuring out what happened instead of proactively stopping the bad stuff in the first place. I saw that with IntelliSee AI can truly make the world a safer place and that it can turn passive surveillance systems into proactive risk mitigation tools,” says Pajerski. 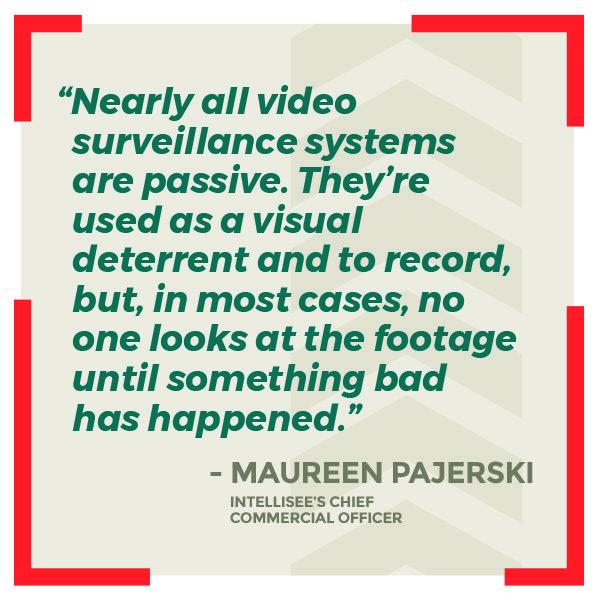 “While AI isn’t human intelligence – yet – computers are infinitely better at doing the repetitive and potentially mind-numbing tasks that we, as humans, aren’t good at. Now, organizations can use their resources to act and prevent instead of either not monitoring their cameras or asking hard-working individuals to do the impossible job of monitoring,” continued Pajerski.

The importance of real-time detection and intervention cannot be understated. Pajerski knows it’s a capability that can improve an organization’s safety, effectiveness, and efficiency. “Some of our customers have monitoring and dispatch resources. With IntelliSee, they can detect a threat – like a trespasser, a weapon, or a slip and fall risk – with their existing cameras and send an alert to their video management system to pop up the view for the dispatcher,” said Pajerski. “That way dispatch can quickly review the screen and determine if they should send maintenance, officers, paramedics, or others to act. That’s where adding a deep learning real-time solution is so important. It’s not reactive, it’s proactive. It works in real-time, and it works within an organization’s existing systems and standard operating procedures.” 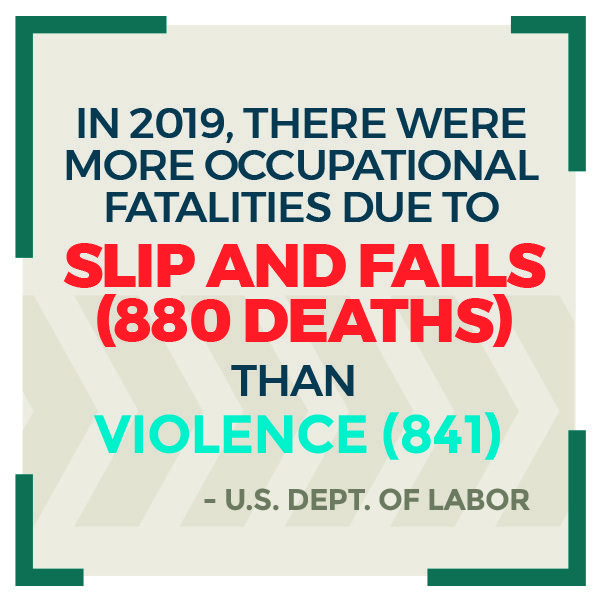 Attacks on employees, while catastrophic, are not the only risks IntelliSee can detect. Falls, accidents, and medical emergencies can be nearly as traumatic for an organization and its people. It may be surprising but, in 2019, there were more occupational fatalities due to slip and falls (880 deaths) than violence (841).

That same year, an industrial laundry employee in Illinois became trapped in a conveyor belt and died as a result. He was discovered only after a fellow employee noticed the machine had stopped working. Upon review of the surveillance footage, the employee had become trapped at 9:56 pm and, immediately upon discovering him, paramedics were called at 10:41 pm – nearly an hour after his accident. When seconds matter, proactive solutions, and real-time alerts are needed.

Overnight and weekend employees often work alone. In those environments, an accident or medical emergency that goes undetected can be devastating, as school superintendent Dr. Stephen Murley found out.

“I’ve led multiple districts ranging from small to large systems,” said Murley. “In every school system, there are situations where staff work alone, often late at night. The overnight janitor in one of my former district’s elementary schools collapsed several years ago. He couldn’t reach anyone, nor could anyone reach him, and his panicked wife let us know that he wasn’t returning calls. We eventually found him, and it wasn’t good. When we reviewed the situation, he had laid on the ground for hours, and it still haunts me. If systems like IntelliSee had existed then, we could have gotten him medical attention immediately and saved a lot of heartache for his family and our school community.”

A Smarter Solution to Solo Safety

In a time where resources are scarce, safety cannot be put on the back burner, especially for those working alone. IntelliSee can alert organizations to incidents ranging from an incapacitated employee laying on the ground to a trespasser loitering in the parking lot. It can also prevent claims by enabling organizations to clean up slip risks before someone falls, getting help immediately to someone who has fallen, stopping the intruder before they vandalize or steal, or stopping a weapon before it enters the building or is fired.

IntelliSee’s AI risk mitigation platform overlays your current security cameras and surveillance system to autonomously monitor for a growing list of potential threats – from the common to the catastrophic – 24/7/365. The platform instantly sends alerts with context to give key personnel the situational awareness needed to act – when seconds can be the difference between an incident and a tragedy.