The Importance of Layered Security

The Importance of Layered Security

When it comes to your organization’s security and safety, you can’t afford to put all your eggs in one basket. Each individual security component has benefits, but when implemented on their own, can also have limitations.

Security guards can voluntarily or involuntarily go missing from their posts. Staff can get “screen fatigue” and “tunnel vision” from constant camera monitoring. Weapons can get around metal detectors. And access controls can’t always keep intruders out before an incident occurs.

A multi-layer security strategy can help offset security breaches and missed threats to keep your organization covered at every level. Effective layered security starts with having a comprehensive plan addressing all areas of your organization and investing in the right security tools for that plan to succeed. 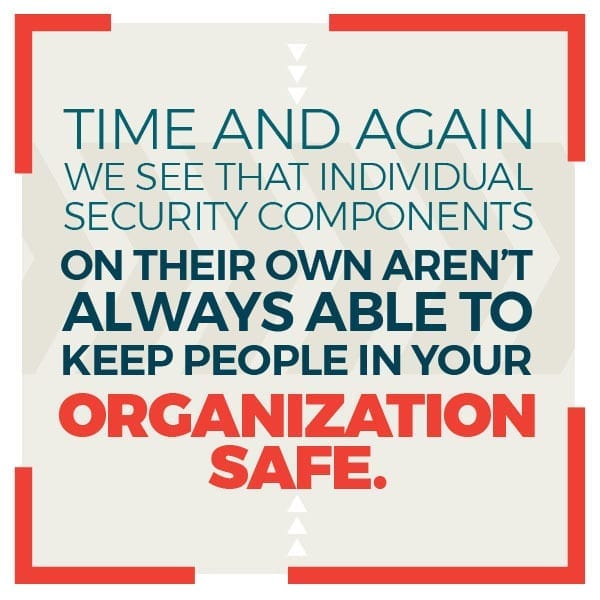 Taking a page out of the school security playbook

What do these layers actually look like? Which security components work best together? And how do you know those components and layers are at their most secure level?

The Partner Alliance for Safer Schools (PASS) answers these questions in Safety and Security Guidelines for K-12 Schools. PASS’s guidelines provide recommendations and best practices for implementing layered security in schools across the country. Although specific to K-12 schools, their recommendations provide a guideline for any organization looking to build an effective and comprehensive layered security plan.

PASS recommends looking at all of the areas of a school as layers that need to be included in a security plan—from the entire school district down to each individual classroom. 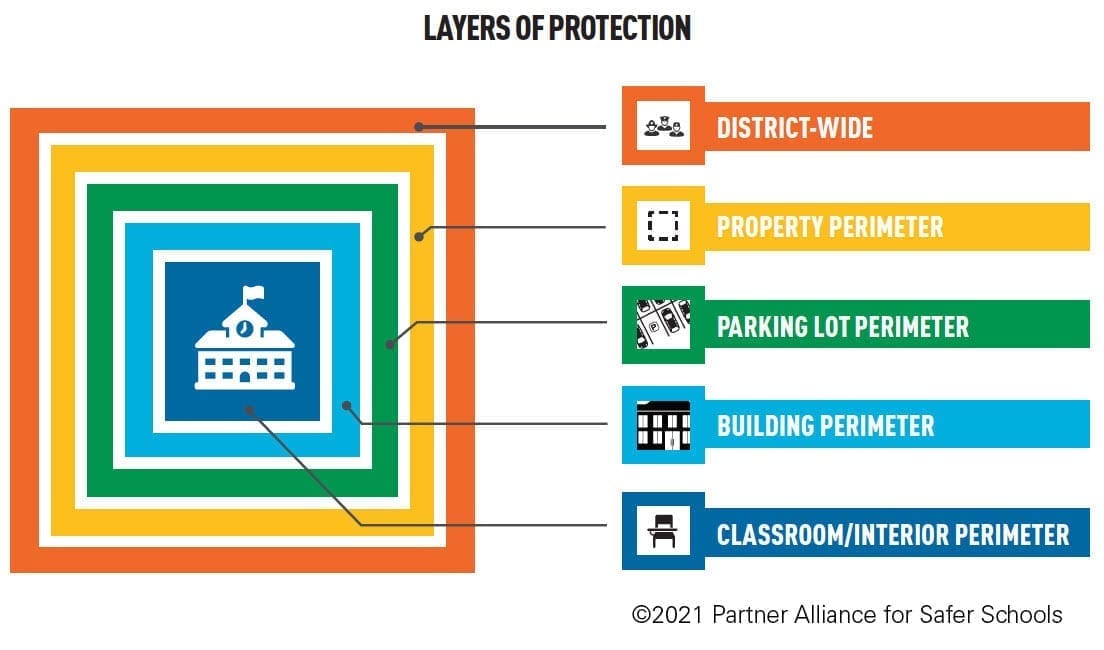 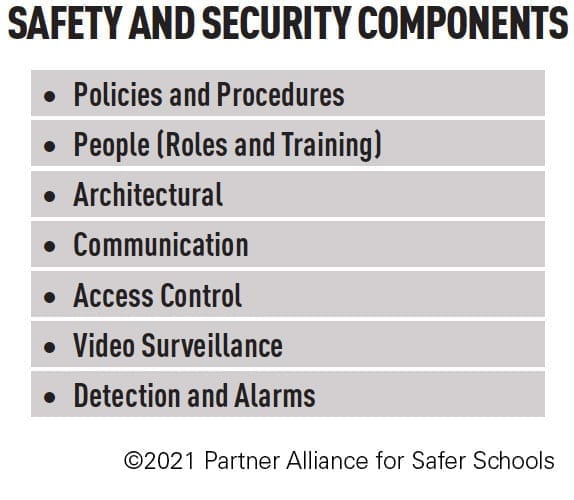 Determining the individual components of security that will work cohesively is needed to effectively keep everyone safe. These components can be determined separately for each layer, then together as a comprehensive system. Often the security components themselves are referred to as “the layers” of a layered security system.

Each component should then be put through a safety checklist to ensure the layers meet the highest safety level achievable. These checklists will help identify any potential gaps in your layered security. 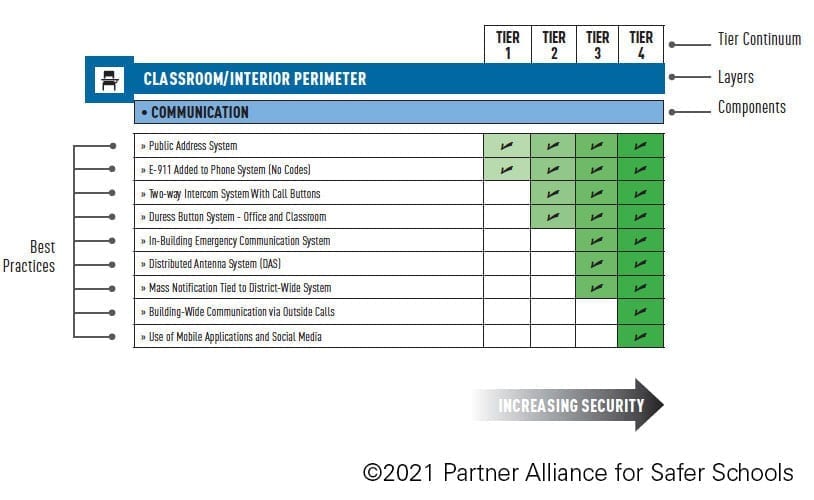 To layer or not to layer, that is the question

It doesn’t seem like much of a question when looking at recent stats and safety breaches. Unfortunately, time and again we see that individual security components on their own aren’t always able to keep people in your organization safe.

Getting proactive with your security cameras

The best way to avoid harmful incidents is to plan for them in advance and take preventative action. Security cameras are a critical piece of the safety and security picture, but if they’re only used after the fact—rather than proactively—they’re not being utilized to their full extent.

Consider that in 2017, 378 homicides took place in parking lots or garages. These areas are often covered by surveillance cameras, but unless the cameras are constantly monitored, a tragedy is simply recorded—not prevented. What’s more, live-monitoring is a monotonous and error prone task. Even when cameras are actively monitored, threats (like drawn weapons) are often missed due to human error.

Threats to safety can also come from unintentional actions. Imagine this all-too-common scenario:

A grocery store nears its closing hour and one of the last customers of the night spills their drink. The security cameras record the spill, but no one is monitoring them, and no action is taken. On her way out, the night manager slips on the spill and falls, rendering her unable to walk on her own or call for help. The next morning she’s found by the day manager and is taken to the hospital where they determine her injuries will sideline her for an extended period. Besides having an injured employee, the store now faces injury-related costs and duties that need to be filled on short-notice. Had the spill been detected, and staff alerted to its presence, the consequences could have been avoided.

Most confined workspaces go unmonitored, and according to the U.S. Department of Labor, about 92 workers die of injuries received from working in confined spaces each year. Such was the case for a 33-year-old man who entered a large industrial dryer of a hospital for a routine cleaning without any other employees knowing. When the automated system activated, he suffered severe body burns and blunt head trauma resulting in his death. Had other employees been alerted to his presence in the dryer, his death could have been prevented. 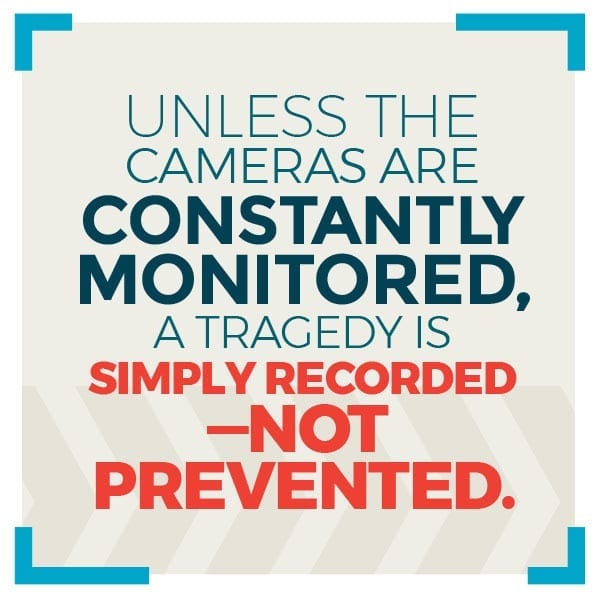 In 2019, a schizophrenic patient walked into an Orangeburg, SC hospital with a loaded semi-automatic rifle and began firing into a crowded hallway. Miraculously no one was killed, but could the tragedy have been prevented if the hospital had been using layered security with proactive defense solutions in place? Automatic door locks, metal detectors and other access controls can be very effective when used as proactive security measures. How can they be proactive if there isn’t any security alert or indication prior to a crisis taking place though?

IntelliSee is the missing layer to make your security smarter and keep your organization safer.

IntelliSee adds a complementary layer of security to your existing surveillance without adding personnel, disruptive renovations or expensive upgrades. By autonomously monitoring your existing security cameras in real-time, IntelliSee allows you to proactively identify threats. Once a threat—such as a drawn weapon, spill, trespasser, etc.—is detected, IntelliSee alerts your people and systems instantly so you can act before an incident occurs. If an incident does occur, IntelliSee’s proactive detection can greatly reduce response times and the severity of outcomes.

Unfortunately, the following scenarios can still happen. But with IntelliSee, you can turn your response to threats from reactive to proactive:

When used as part of a layered security strategy, the IntelliSee AI risk mitigation platform can dramatically improve the safety of your organization, your people, and those you serve. Imagine what IntelliSee can do as the proactive piece for your layered security plan.

Interested in a live demo? Let us know if you’re ready to see what AI-enhanced defense can bring to your layered security.